About Us
Learn who we are and what drives our passion

Singapore Exchange Limited1 (SGX) is Asia's most international stock exchange, and together with its affiliates, offers a fully integrated value chain from trading and clearing to settlement and depository services. SGX, together with its affiliates, is Asia's leading counterparty for the clearing of financial and commodity products and serves customers all over the world through multiple locations.

Headquartered in Singapore, SGX operates a derivatives sales o ce in Hong Kong, a liaison office in Mumbai and representative offices in Beijing, London and Tokyo. SGX is also a member of the World Federation of Exchanges and the Asian and Oceanian Stock Exchanges Federation.

Singapore Exchange Limited (SGX), as part of their obligation as a Derivatives Clearing Organization recognized by the U.S. Commodity Futures Trading Commission (CFTC), is required to comply with reporting regulations under Part 39 and Part 45 which are applicable for Over-The-Counter (OTC) commodities and Over-The-Counter Finance (OTCF) products. For Part 39, it is required to report SGX’s Members Positions, Margins and Cash Flow to CFTC and for Part 45, it is required to report Swap trade data to the recognized Swap Data Repository (SDR) via the Depository Trust & Clearing Corporation (DTCC), which is the company that has been approved as the Swap Data Repository agent by CFTC.

In this system integration, Enterprise Service Bus (ESB) has to support the integration of data from multiple upstream systems, with consolidation and computations where required, before they are transformed into the required formats to be transmitted to various reporting parties such as CFTC (for Part 39) and DTCC (for Part 45). Parallel to this integration, SGX is required to report member account balances and securities to the CME Group Inc. on a daily basis.

SGX selected the AdroitLogic UltraESB as the Enterprise Service Bus of their choice, and engaged AdroitLogic to design, build, test and deploy the solution based on the UltraESB.

For Part 39, the ESB integrates data received from two upstream systems to generate 8 different CSV reports on a daily basis and sends them to CFTC via SFTP, with retry capabilities to handle possible failure scenarios. In this data integration flow, the ESB communicates with the Report Server, which is a Microsoft SQL Server (MS SQL) database, for the OTC commodities data, and with an SFTP server for the OTCF data. 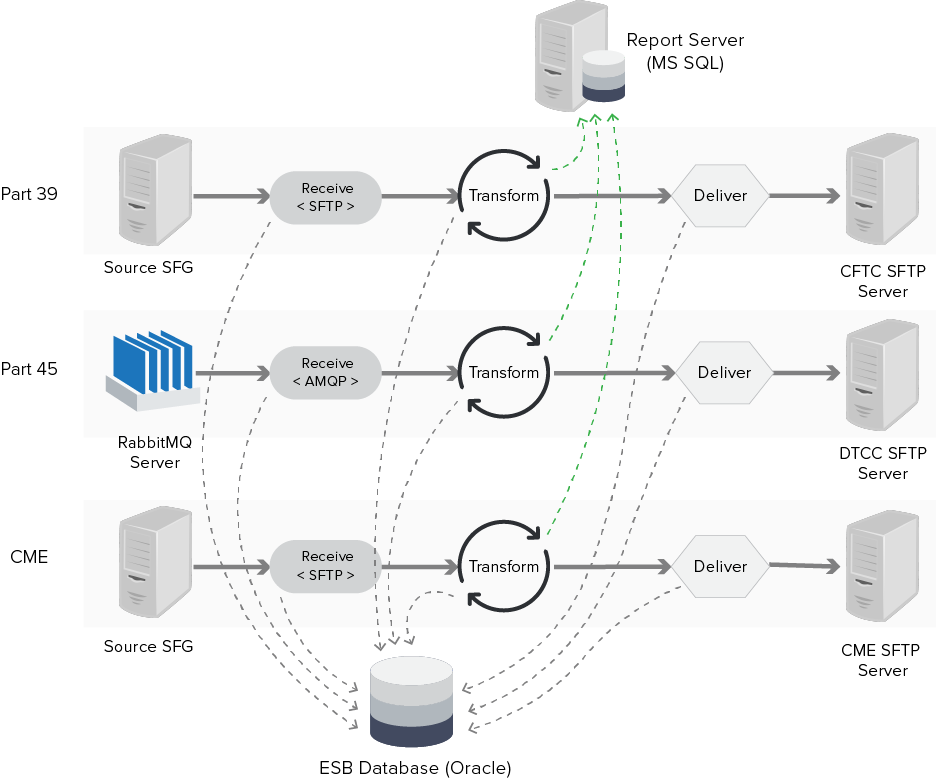 For Part 45, the ESB integrates data from two upstream systems: Trade Report Management (TRM), which is an AMQP-based message queueing system, and the aforementioned MS SQL Report Server database, to generate four type of reports which are then dispatched to DTCC via SFTP.

For CME integration, the ESB generates two CSV reports on a daily basis by integrating data received via an internal SFTP server and the Report Server.

"We have used UltraESB in our regulation reporting to CFTC, DTCC and CME. The ESB dashboard is user friendly and allows us to manage the report delivery in a convenient way. We are very happy with the swift and proficient customer support offered by AdroitLogic throughout our engagement."

Using UltraESB, SGX was able to separate the integration logic from the business oriented systems, while achieving the much-needed flexibility of introducing subsequent changes to the integration logic through the ESB with minimum time and effort. The embedded management console of the integration solution provides monitoring of the message flows, audit log view and retry capabilities for report generation and distribution with pre-configured delays in subsequent retries.

1. SGX and its affiliates make no representation, warranty, guarantee or endorsement whatsoever (whether express or implied) regarding, and hereby expressly exclude all responsibility and liability for, any and all products, services, processes, solutions and/or other information set out herein or in any ancillary documentation.